Some Questions and Answers about Vila
by Nicola Mody 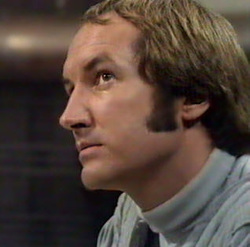 ​Why was Vila known by his first name?

People have suggested this was because of his low status (Delta service-grade 'boy'), or because there may have been a relative widely known as Restal. I think the answer's simple. He has been wanted all his life under the name of Restal, so he'd avoid its use.

I can imagine him living in obscure comfort in a sub-leased apartment, always using cash, and being known only as Vila to acquaintances and drinking buddies at the local pub. The law's enquiries for a Restal wouldn't turn him up easily. After that, it would be pure habit; he'd be very uncomfortable being called Restal.

Why didn't Vila know about the palm-print lock on the London?

I'm sure he did—after all, he doesn't have much problem with the Central Control locks, and they must have been among the best the Federation could devise. He just preferred to play it safe rather than find himself one of the major players in a dangerous game so early on.

Why didn't Vila go with Kerril?

Vila did try to explain in the little time he had, which made him sound like the compulsive thief he isn't (although he may be a compulsive lock-picker). He says first that there's nothing to steal on Homeworld, then goes on to say that he breaks into safes and vaults etc. because he can and no one else can. He depends on technology and its intellectual challenges, and what would there be for him on a pioneer world? Kerril has seen him at his best—breaking into a very difficult vault, solving problems, and being brave, charming and kind—she probably wouldn't like 'what was left'—Vila would not be good at whacking nails into wood and raising barns, and he'd miss his civilised pleasures: chess, reading, good conversation.

Why did Vila's clothes change after he teleported to Terminal?

Vila is a cautious lad, and when Zen informed him and Dayna that the Liberator was so damaged by enzymes that it could not even leave orbit, he remembered his mother's advice always to have clean underwear and a change of clothes. So he went to his cabin, stripped off his loose Russian-style tunic and trousers, put on several pairs of clean underpants over the ones he already had on, put on an outfit he'd worn earlier, and finally the looser 'Russian' one on top. Before leaving his cabin, he also grabbed his emergency lockpicks. I wouldn't be surprised if he made a detour to the kitchen on the way back and grabbed a snack or two. Once down on Terminal's underground base, he of course got overheated and took off his top layer. Well, hey, it's an answer!

Vila's 'kill' and the 'blooper'

Vila's credited with one kill, of a Federation trooper on the Feldon crystal planet, and it looks very callous, especially for him. People also complain that the trooper has disappeared in a later scene. However Vila had a Scorpio gun, and they had different clips. Vila would have only used a stun clip; anything else would be out of character. I notice that even so, he lets almost all the troopers run by, attracts the last one's attention with a whistle, then stuns him—with his eyes squeezed tightly shut! The trooper isn't there later because he's come round and crawled off.

Why couldn't Vila be conditioned?

Why could Cally feel Vila's pain?

Why was Vila 'got at' on Ultraworld?

Why did Vila go on his Space City binge?

Why did Vila have so many teleport accidents?

I don't know why Vila couldn't be conditioned, but he must have had some unusual mental ability to avoid it. As I think he did, which nicely answers the other questions in this group, I'd say he had a method of shutting his mind off from the conditioning.

Cally said she could receive only from another Auron, but she could sense Vila's pain when he was on Chenga. He was also mentally 'got at' by the Sarcophagus alien (more so than anyone but Cally) and by the brain in 'Ultraworld' (the only one in the crew besides Cally). So I think he has some form of telepathic sensitivity, perhaps without knowing it. He can probably pick up and receive vague impressions from others, though certainly not thoughts as such—perhaps a heightened awareness of others' feelings. He seems to be quite a sensitive person.

Perhaps he could sense danger as well; he said he did, and was always right, though there were a few times when he failed to sense it.

If he was more susceptible than the average human, perhaps the other-dimensional alien who influenced Cally in 'Shadow' also was able to induce him to hide Orac and go on his binge (which was an attractive thought to him anyway)—an incredibly stupid action, and very out-of-character as it was dangerous for him personally and for the others, with a million credits on each of their heads.

Vila was also prone to teleport accidents, starting with landing on his backside (Avon says 'head' as either a joke or mistake) when teleporting to the alien vessel in 'Sarcophagus'. That accident was due to the alien's influence; Avon and Vila were only able to teleport back with Cally's help, so she was obviously able to control it, implying that mind or belief has an influence. Vila's real teleport malfunctions start after that (landing with one foot in the water is just chance). I think he lost his trust of the teleport, and somehow this affected its working properly for him. Teleports must be sensitive to telepathy, as Cally was able to make it work with her mind-power, so Vila's subsequent distrust and fear could have affected it adversely.

It's speculation, but it fits a lot of the facts, and I use it in my fiction.